What is going on with Democrats?

1. We have VP Joe Biden advising Americans “if you want to protect yourself, get a double barrel shotgun… Buy a shotgun! Buy a shotgun!” with his typical crazy-eyed look.
Biden has even more advice: “So you want to keep people away in an earthquake? Buy some shotgun shells.”
Biden just can’t shut up: “… you want to keep someone away from your house, just fire the shotgun through the door.”

2. We have the White House purposefully releasing a photo of Obama with a shotgun, and then warning Americans not to photoshop it:

Of course, Americans photoshopped it anyway (which is their right under the 1st Amendment of the U.S. Constitution)… 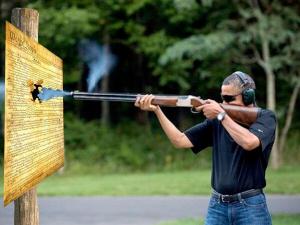 3. Obama is wasting everyone’s time by responding to recent gun violence by “calling on research on the effect of media and video games on gun violence.” Hmmm I wonder… could there be any correlation?? This is a topic that’s already been extensively researched, and the research results are common sense.  Furthermore, Obama’s unconstitutional, counterproductive anti-gun policies only serve to make it look like he’s taking meaningful action.  All the gratuitous, desensitizing violence in the entertainment industry is a mere footnote to Obama— it’s not a central part of his gun control discussion because Hollywood supports him politically.