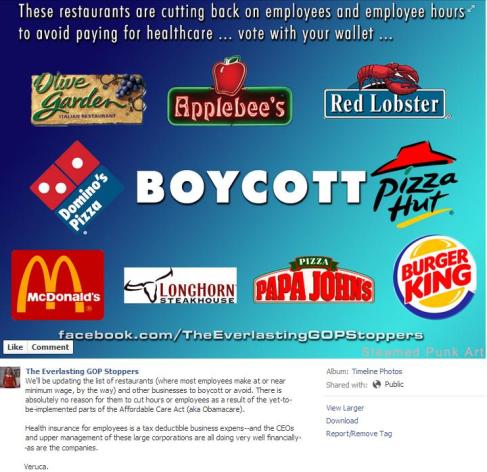 It’s not very surprising that “Veruca Salt” would be whining about the effects of Obamacare after viciously attacking conservatives for opposing it. Maybe it would have been better for the Democrats to lose the 2012 election, so that they could pin the consequences of their failed policies on the Republicans (again)… but now, the Democrats have to deal with realities like Denny’s restaurants in Florida cutting employees’ work hours and adding a 5% Obamacare surcharge to customers’ bills. Will the Democrats try to boycott the entire U.S. economy?

Obama joins U.N. “Human Rights Council” which now calls for a boycott of American companies that do business in Israel

Obama joined the U.N. “Human Rights Council” in 2009, when the U.S.’s Ambassador to the U.N. Susan Rice pledged, “Working from within, we can make the council a more effective forum to promote and protect human rights.”

Well, look where that policy has brought the United States to now: “The Washington Free Beacon has obtained a report soon to be released by the United Nations that calls for an international campaign of legal attacks and economic warfare on a group of American companies that do business in Israel, including Hewlett-Packard, Caterpillar Inc., and Motorola Solutions Inc. The Human Rights Council (HRC), a body dominated by Islamic countries and known for its hostility to, and heavy focus on, the Jewish State, issued the report… Members of the HRC include infamous human rights abusers such as Saudi Arabia, Qatar, Jordan, Libya, China, and Cuba.”